A distinctive feature of this review will be the fact that it is made entirely on the version of the game for the Xbox Series X and that is why it was a little delayed from the moment of release. All screenshots in the article are taken from the console, just like the video.

This is the third iteration of the Watch Dogs series subtitled Legion. Quite frankly, this is one of those series from Ubisoft, which is included in the line of “constantly coming out”. At the same time, everything is built on the usual canons: an open world, a confrontation between villains and civilians, some philosophical topics, dystopia, and that’s all.

The strong points of the game really include the location of the plot – the city of London. The virtual city turned out to be well-developed, well-detailed, and, as shown by comparative videos, quite close to the real prototype. Despite the fact that the action of the game takes place in the future, there are many recognizable places: from the very Big Ben to the new steep Ferris wheel on the banks of the Thames called “London Eye”.

Thanks to the power of the Xbox Series X, the city ​​looks very beautiful visually, especially with ray tracing. All these reflections in the puddles of eternally rainy London, burning foliage and the enchanting atmosphere of the night illuminated by bright advertisements are truly a magnificent sight. No soap, fuzziness, or problematic textures. It can be seen that the game was more prepared specifically for the new generation consoles. Perhaps there is no full-fledged 4K here, but all the same – the version for the new generation console looks luxurious.

At the same time, the city itself lives its own life and does not look empty. Some random events are constantly happening here and there. Somewhere, police officers arrested some poor fellows, and they can be quickly released, having previously somehow switched the cop’s attention. The same applies to the general atmosphere – everything is alive around, and you literally feel yourself in the middle of the metropolis of the future, albeit not far off.

Dorns fly everywhere, lots of advertisements, some kind of roadblocks, obstacles, scanners, video cameras and other attributes that are inherent in how we imagine the world of the future. In the middle of London, the Albion security organization dominates, which came to shadow power through terrorist attacks. This is where the whole plot of the plot lies. 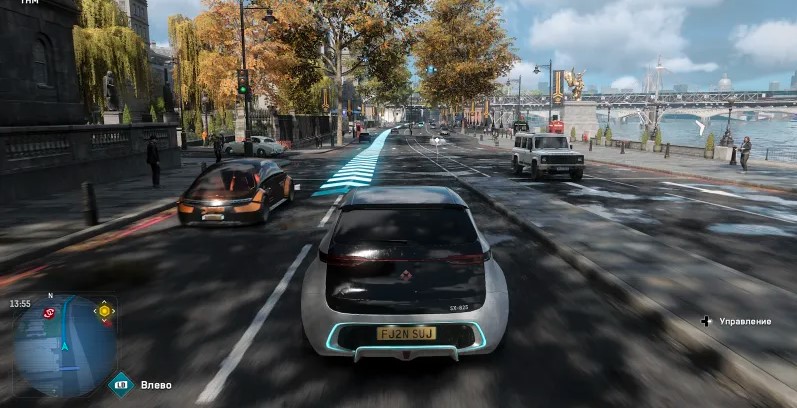 In fact, Zero Day is behind the attacks, which, in turn, framed DedSec through these attacks. The latter fell out of favor, were severely persecuted and were almost completely eliminated. At this time, being in cahoots, Albion and Kelly’s gangs pushed out all the other hacker groups from the city and completely “crushed” both the shadow sphere of life and the civil one.

Before us is a natural dystopia, where all the rights to privacy and its inviolability have been pushed far and long for the sake of the common good – the minimum number of violent crimes. True, Kelly’s gangs do not care – they sell slaves, and organs, and whatever they want. The showcase part of the world, as always, conceals such a utility room. 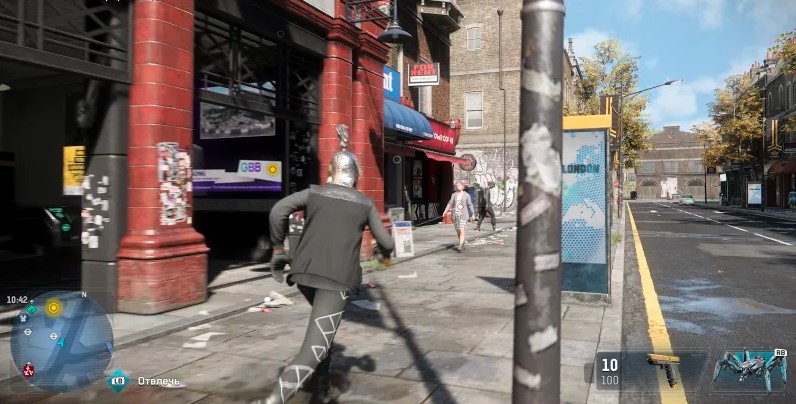 With all this, we will need to figure out the plot: save London and restore the honest name of DedSec in the name of world peace. At the same time, the game does not have an obvious protagonist and everything rests on agents, whom you will independently recruit during the game. All agents have their own special skills and personality traits. Someone can master hand-to-hand combat, someone is an excellent shooter, someone is a hacker from God, someone is a lawyer – there are many variations and each helps to open separate gameplay moments. Lawyers, for example, are quick to pull other agents out of jail.

The narrative of the game finally found a balance between booth and frenzy in the second part and total despondency in the first – now it is a restrained, albeit with humor, action movie. Although, the game can be played in the classics – without shooting at all and without directly participating in the actions. That is, simply using flying drones, system hacks and robo-spiders. Here you can start a car engine remotely and crush one of the guards or set a trap in the path of the target (or your pursuers). True, shooting and climbing ahead is still more fun, and the game does not prohibit you from this. 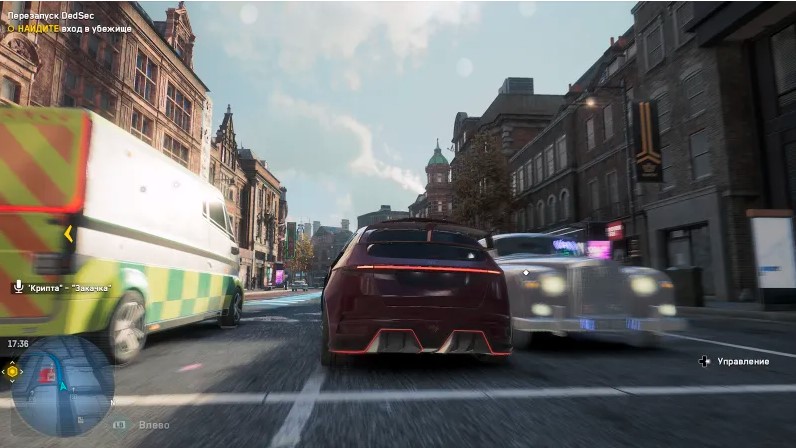 At such moments, Watch Dogs: Legion looks much better and more dynamic, although there are no revelations waiting for you here. In battles, everything is simple – use more cover, shoot straight in the head. And in fights, you need to attack on time, break through the blocking and deliver counterstrikes. Nothing new, but soundly executed, from which it evokes pleasant emotions.

The possibility of recruiting an old woman into your “Legions” looks funny. This, by the way, is both a plus and a minus of the fact that the game does not have a specific main character. It seems that the variability is very large, but at some point, because of such characters with a cane and old age, all the seriousness and depth of the local world collapses due to the absurdity of what is happening. What does grandmother care about uprisings, she should be in the clinic by 6 in the morning. But given the fact that literally anyone on the street can be recruited, this is more of a fun moment than a game problem. 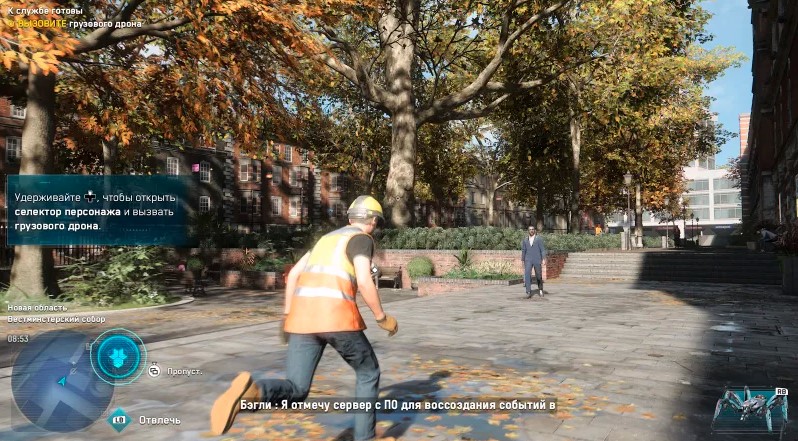 Despite the fact that this part of the game has been created for almost four years – it feels like the past part, just moved from sunny San Francisco to rainy London. Cars are still too arcade driven, and, at times, even a truck from a passenger car is difficult to distinguish, not to mention the behavior of multi-wheel drive vehicles. Movement on a motorcycle looks like you are riding on rails. All this is saved by a very impressive visual component – Ubisoft still knows how to make beautiful sandboxes very well.

London here can be completely tuned into a wave of rebellion. The city is divided into districts, in each of which you can raise a rebellion. To do this, you need to capture the towers. Well, what were you waiting for? Only here are not towers, of course, but billboards with propaganda. We turn them off, we find some main rebellious NPC in the area, he reports about some significant place – we go there and do another hacking of the server, but more difficult. On this, in fact, everyone is your region, everyone loves you, you are the people’s liberator. You can get off the armored car and stomp to the neighbors.

Unfortunately, the local plot can be sent to the camp of secondary to the bone without any hesitation. Jokes aside, even in his description it becomes clear how it will end. And no, this is not a deceiving feeling – everything here is really without surprises and revelations. For all the apparent seriousness, the plot lacks some freshness and originality. It was as if all the twists of the past parts were collected here and woven into one canvas, but in a different city and with its own atmosphere. As a result, at some point it becomes unbearably boring and uninteresting. Although it’s worth playing to the end. But even here an unpleasant surprise will lie in wait for you – the game is very short, it can be completed in 15-17 hours without side effects and other tinsel. 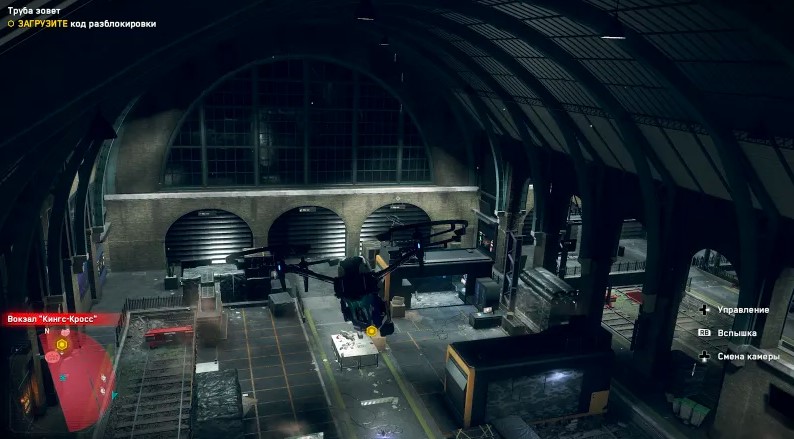 In general, Watch Dogs: Legion is a typical part of its series, which has absorbed something from the past and had minimal distinctive features. If you’re a fan of the series, it’s worth taking. If you just bought Xbox Series X and want to see all the power of the first games on it – similarly, you can buy and play for your pleasure.

In general, one way or another, everyone will find something to do in Watch Dogs: Legion, just do not expect any revelations. In addition to self-copying, there is especially nothing to scold the game for, and, given that enough time has passed between the parts of the series, I do not want to criticize the game strongly. On Xbox Series X in particular, the game looks really nice. There is plenty of gameplay here and for every taste. In general, the game gives exactly what players expect from Watch Dogs.

Verdict: Watch Dogs in all its glory. The kind we’ve seen at least twice. With all the resulting pluses and minuses. And also very beautiful London, on the development of which a lot of effort was clearly spent.