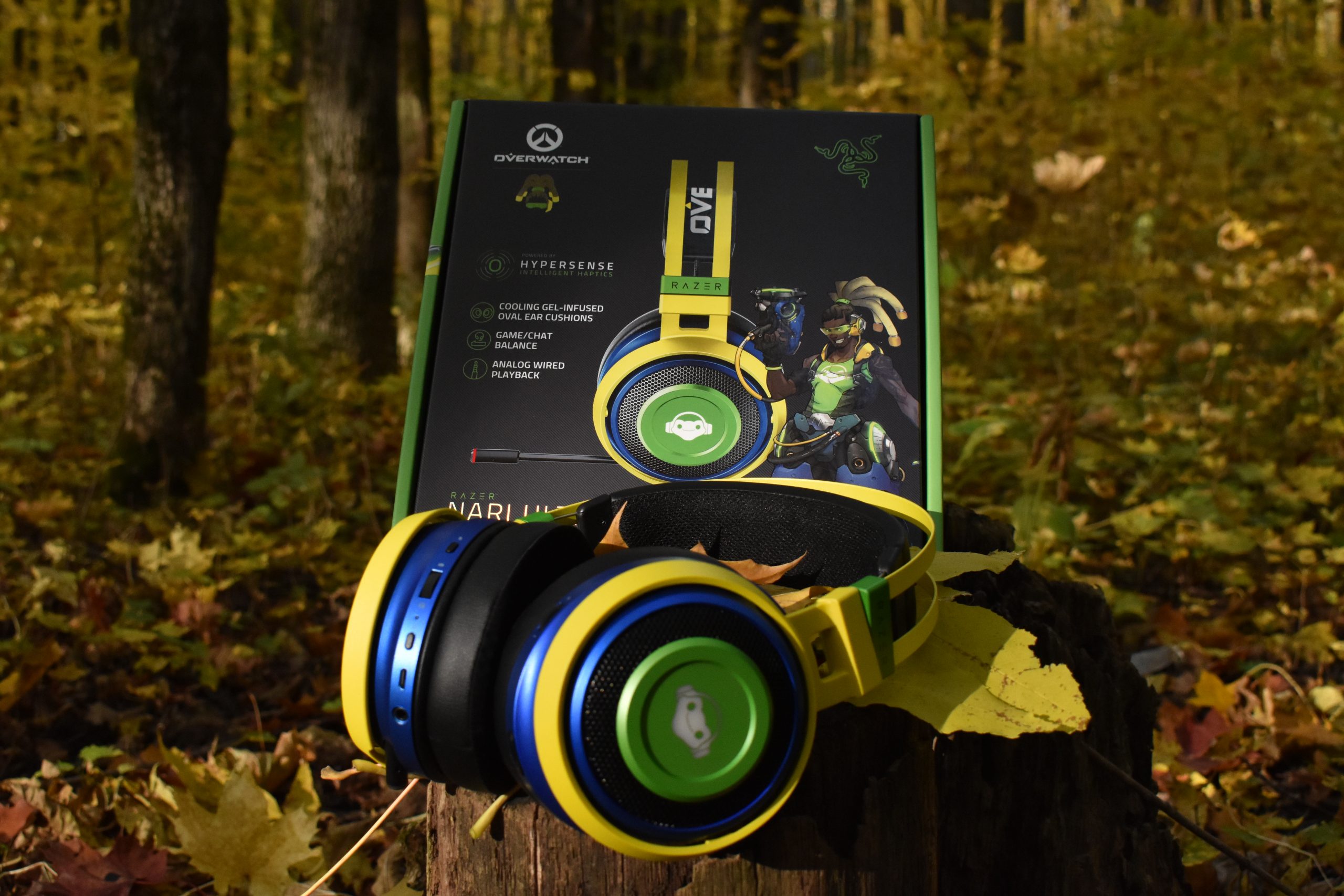 Razer has recently been delighting with its mice – smaller and wireless versions are popular, especially from the Viper series. There are also gaming headsets, for any, even the most specific taste. Recently we were sent to try out the Nari Ultimate Overwatch Lucio Edition and today we will tell you about this unusual version.

Headphones are greeted with impressive packaging, however, now this is already the standard for any device. The inside is poorer – no frills, a simple cardboard plug for cables, brochures and traditional stickers, an AUX 3.5 cable and a Micro-USB charger. Both cables are braided with nice ties. 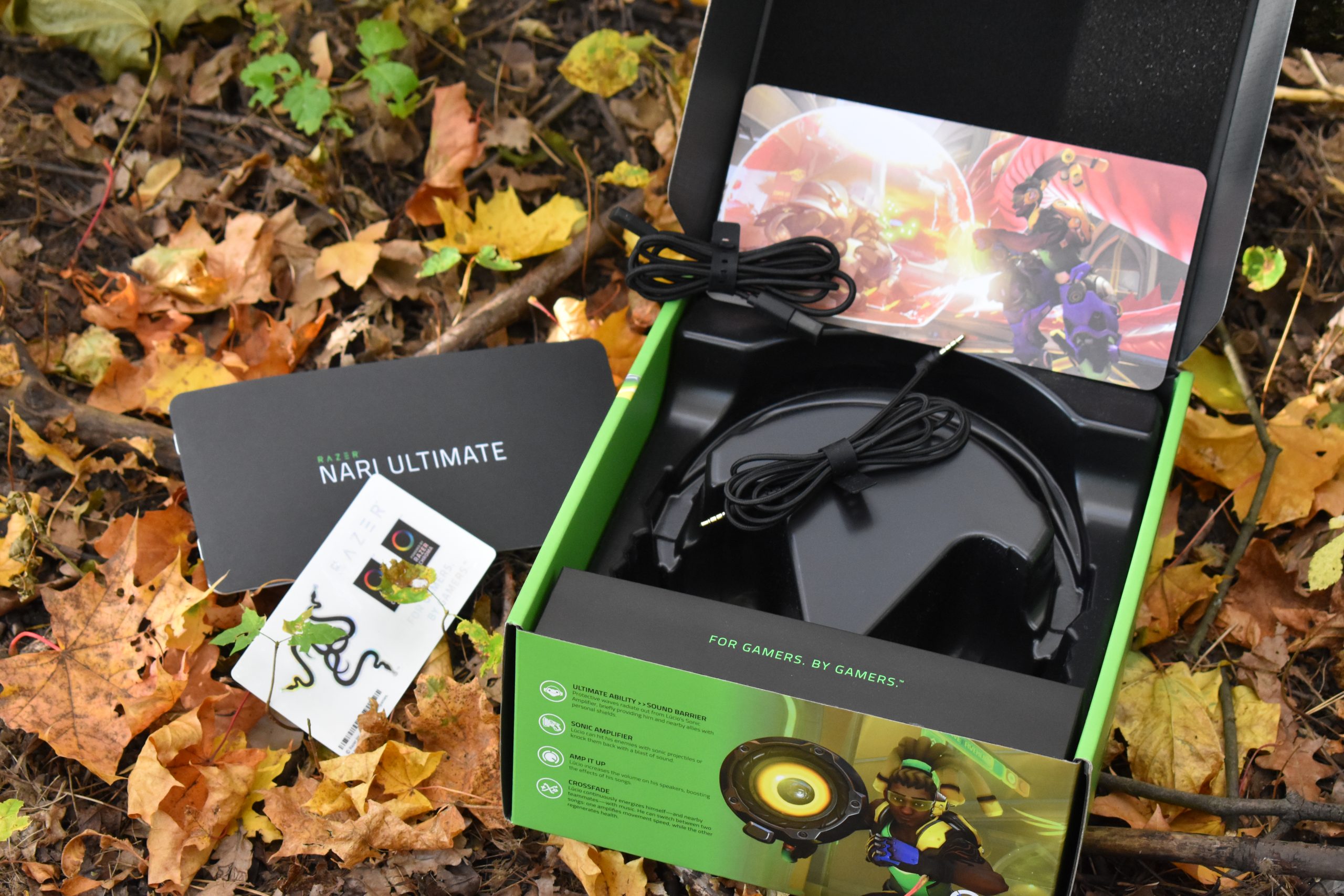 Design and device
The headphones are huge – if you put them on, the cups easily fall into the field of view. The weight is acceptable, it doesn’t put pressure on the head anywhere. The large size of the bowl body has its own reasons, but there is also plenty of room on the inside – the ears sink in them, even my rather big locators do not touch anything. The fit is surprisingly comfortable, but somewhat looser than it should be – if you turn your head sharply, the headphones will not fall off, but you have to correct them.

The material of the ear cushions is of high quality – the edging is made of noble leather of young dermantine, the part adjacent to the head is made of some kind of fabric that resembles the soft lining of a jacket. The manufacturer claims there is a cooling gel inside the ear pads. After these words, the imagination draws a pleasant coolness in the hot summer around the ears. In fact, the coolness is felt, but the material heats up after 30 minutes. True, it also cools quickly if the headphones are simply removed for a while.

The headphones are stylish even in the standard version, and with new colors, the Overwatch logo and Lucio face for lighting, they only get better. Unfortunately, if you put them on, people will see the size first, and only then the design. They will definitely attract attention, but the dimensions make portable use problematic. 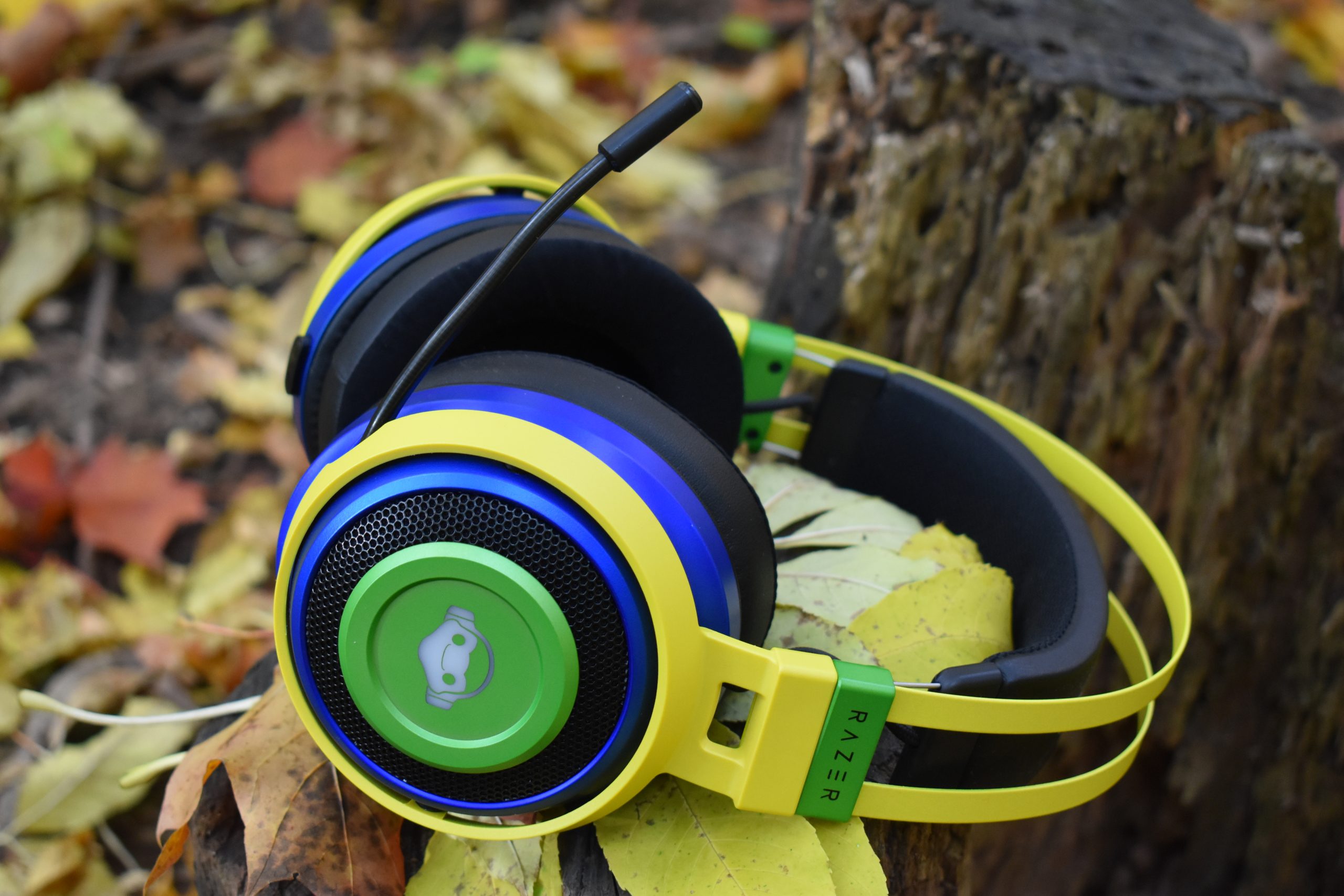 There are also questions about the design. Everything is fine with the upper part – an impressive double metal arc and a “crumb” on the head on two strong rods, the wires immediately enter the bowls and do not fray. But those very impressive bowls are held by rings made of soft plastic, and the swivel mechanisms are not credible. It seems that a serious fall will be fatal, and nothing will help the cups. However, despite the softness of the plastic, it doesn’t feel cheap.

There are several controls on the bowls. On the left there is a microphone mute button, a mixer wheel, a charge and operation indicator, a power button, a Micro-USB connector for charging, a retractable microphone and a combined AUX 3.5 for wired connection. On the right is only the master volume wheel and the slot for the USB whistle. 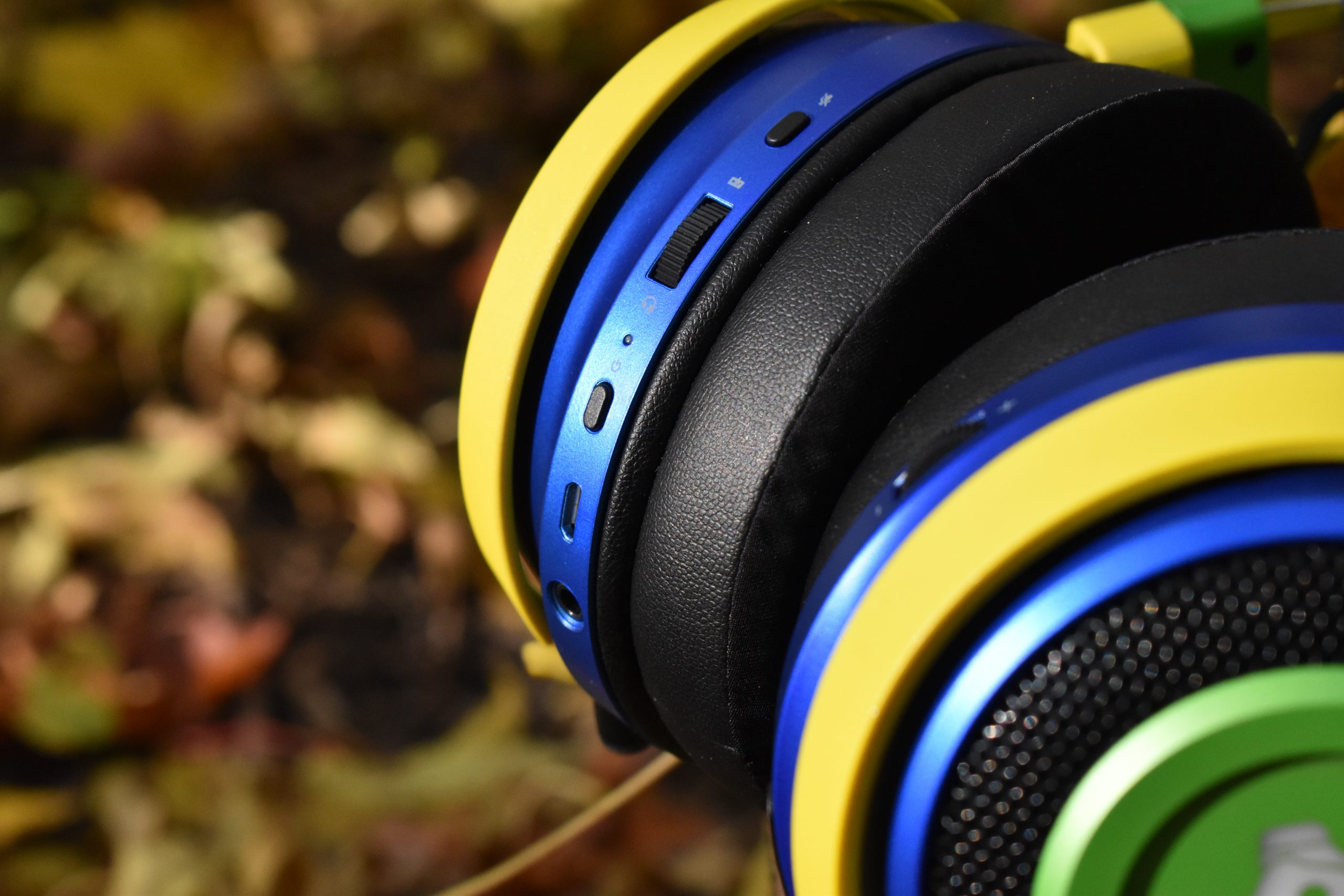 Now the question may arise – what kind of mixer in general? This is one of the main features of Nari Ultimate. When connected via a radio channel, the system will detect three devices at once – Chat, Game and THX Spatial. The mixer always has two channels – Chat and Game / THX Spatial (depending on what is selected). The first is for voice communication, the second is for games. The wheel allows you to control the relative volume on the fly, and the right wheel adjusts the overall volume of both devices. An interesting solution, but the left wheel has pronounced volume thresholds, so it’s not always possible to fine-tune this mixer. Perhaps, in the next version of the headphones, this will be pumped to make the tuning more subtle and individual.

Sound Impression
THX Spatial is another virtual surround sound system licensed by Razer. All games support a simple implementation, but some offer special “competitive” modes. I’m not a fan of virtual surround sound, and Spatial illustrates this perfectly. The frequencies are distorted too much, the scene is narrowed. Yes, it is easy to determine the direction from which the sound is coming, but the distance is no longer calculated – even relatively distant sounds seem to appear in front of the nose. You can get used to it, and you can also benefit from this, but at what cost?

Best of all, these headphones show themselves in normal stereo mode. The sound is predictably muffled, meaty-bass. While I hate to play around with EQ, here it is built into Razer Synapse and allows you to get great sound from the Nari Ultimate without losing detail. Suitable even for listening to music.

And here we come to another Nari Ultimate trick – the intelligent technology of tactile vibration Razer HyperSence based on the developments of the Lofelt company. Yes, these headphones vibrate. Much time has passed since the first appearance of “artificial bass”, technology has gone far ahead. HyperSence is capable of a lot, even a kind of “click” when turned on / off, similar to Apple’s Taptic Engine. In music, the main thing is not to overdo it with the settings, otherwise your ears will start to itch from vibration, but I still prefer to leave HyperSence at about 40% power. It turns out like this – deafness was removed with an equalizer, and we achieve soft bass with vibration without drowning out other frequencies.

The result is surprisingly good, but not always. HyperSence chooses when and how to activate vibration. It can be a hard kick to the kick or a cool explosive feel in the game. Or maybe ignored bass guitar and constant annoying swotting when firing a light assault rifle. In general, HyperSence seems to forget about really low frequencies, focusing on low-mids.

In Razer Synapse, you can adjust the bass boost, speech clarity, sound normalization and vibration intensity from 0 to 100. None of this except the last slider I do not advise to include – it will not be better. Equalizer 10-band, but with only one slot for user settings. You can try to tame the microphone by checking the speech clarity, noise elimination and normalization. It won’t get better, again – the sound from the microphone is mediocre, especially for headphones at this price. However, when was the last time you saw a good microphone in wireless headphones? But you can completely remove the backlight and enable surround sound only in certain applications.

The stability of the software is a minor concern. For example, for some time Overwatch crashed with an error, even in stereo. It turns out that this bug has long been known, but then why bother branding Nari Ultimate? For nothing that THX did not come up with any “competitive sound modes” for Overwatch. Didn’t notice the Razer Synapse update, but the bug is gone. True, THX Spatial is still not implemented in the game.

Another oddity is the very third THX Spatial audio output device besides Chat and Game. Synapse strongly recommends choosing Spatial for “best sound quality”. Okay, so be it, but I didn’t notice the difference. So why “enhance” and “virtualize” audio for a regular Game device? Why does it react to THX Spatial Audio settings? It would be much easier to leave Game in stereo by default, otherwise there is no point in selecting it at all. Moreover, the general activation of THX Spatial Audio even affects the stereo sound (not for the better). What happens under the hood of Synapse is not clear.

Working hours
With very intensive use, the Nari Ultimate battery will last about two days. Considering the backlight and vibration, this is not surprising. Charge only from a separate unit – via USB it will take all night. In addition to the charge and work indicator, there are also sound signals in the headphones themselves. If the battery is close to zero, a nasty short squeak will remind you that the finish line is coming soon. No one bothers to play and charge at the same time, as long as the USB cable is long enough. The wired connection only works through the combined AUX 3.5. You can connect to a smartphone, having lost THX Spatial and getting about 60-70 percent vibration and backlighting. And you can’t turn them off without Razer Synapse. It is the same with consoles, except that the radio channel through the USB whistle works with them without problems.

Outcome
The Razer Nari Ultimate Overwatch Lucio Edition is odd and ambiguous. These are stylish, huge wireless headphones with cool advanced vibration, virtual 7.1 and a mixer, but somehow there are a lot of problems and all sorts of “buts” for a device in the mid-top segment (19,990 rubles). I can advise you to try them out somewhere for the sake of HyperSence, to look at the design. Maybe Nari Ultimate will appeal to collectors and fans of unusual devices.